Two weeks ago Judith and I went away for 5 days to Barcelona. We had a great time enhanced by a week of blue skies, sunshine and 18 degrees Celsius. We did many things but only scratched the surface of this lovely city and will have to go back again.The Sagrada Familia Basilica,(see picture above) created by Gaudi is breath taking although not yet complete. It is a must to see. We had a 10 minute wait to get entrance tickets, having arrived by a tour bus. We had taken a two day ticket which gave us a circular route to the west and east with the facility to get off and on as we chose. This is something I would recommend as well worth doing to get your bearings but to choose a few things before you go that you want to see, when time is short. If you do go to the church be advised to go underneath to the crypt where there is an enormous display of Gaudi’s drawings and an explanation of his thinking. He was a great architect and artist, with a basic back to nature theme.
We also went to the Picasso museum because he has a close connection with Barcelona. The museum is devoted to his life from early works right through his various periods. The real excitement for me came at the very end of the various rooms in the gallery. He was fascinated by Velázquez and his painting of the family of Felipe IV which is in the Prado museum in Madrid. The series of paintings that Picasso did, Las Meninas, is explained in a wide corridor by means of a video presentation, which superimposes his pictures on that of Velázquez. His numerous attempts are all there to see in the next gallery, once you have looked at the video. Be advised; don’t go into the gallery housing these paintings without seeing it. I now think I understand Picasso much more than I did previously and it has set me off thinking about a series with which I might experiment. Something I re-visited whilst there are the line drawings he did without taking his pen off the paper.
It inspired me to try whilst having lunch in the old quarter of Barcelona.

I also tried whilst waiting in the Airport. Since I have been back I have used the technique both in figure drawing. It’s quite a demanding drawing technique but makes you really look and think carefully. I have added my sketch book attempts here. And of course look at Picasso’s minimalist line drawings on the web or better still, go to Barcelona. 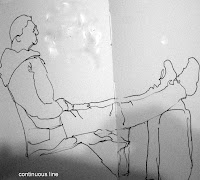