The magic of Jane french

At our last meeting, we were fortunate enough to have gifted artist Jane French give us a demonstration in portraiture using oils. Her source photo was that of her son, some years earlier. Starting with just a faint pencil sketch on canvas, Jane set about applying mid tones of paint first, working her way around the face in careful, deliberate strokes using a chisel edged brush for most of the time. A thinner brush was used only to pick out finer detail at the end.

A final dash of white for highlight to the eye and lower lip had the effect of making the painting come alive, even at this early stage of development. Most of us could detect magenta and yellow in the face in the photograph, but we were amazed at how Jane could see blue and grey, which worked perfectly once we saw it applied.

All in all, a lovely evenings entertainment, and much food for thought in respect of our own prospective paintings.
Posted by _Frankb10 at 20:44 1 comment: 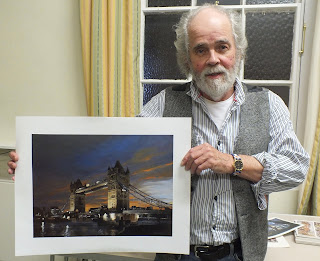 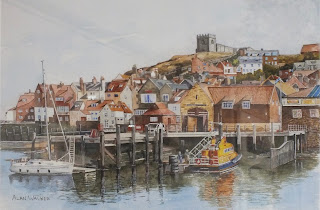 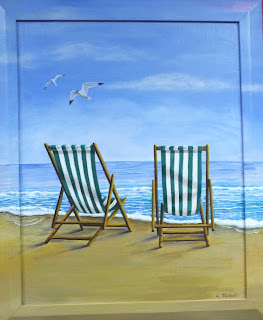 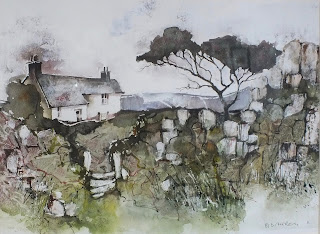 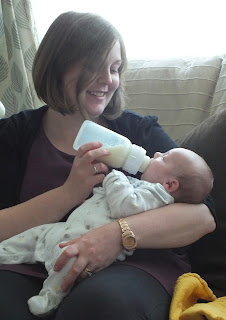 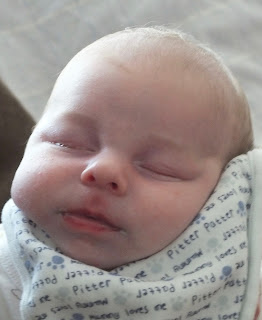 Can you recognise whose work it is? Only a week to go to the Annual Art Club Exhibition. I wonder if any of these will be completed and feature? 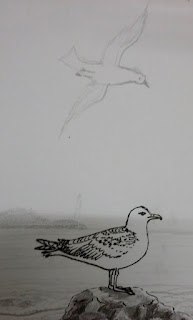 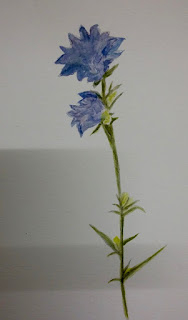 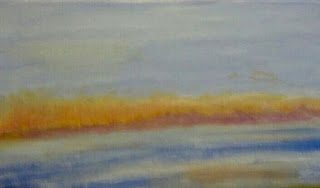 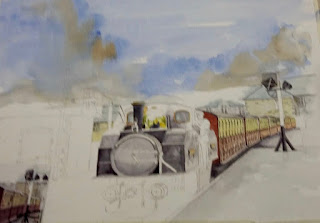 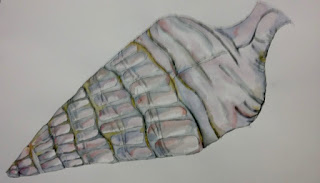 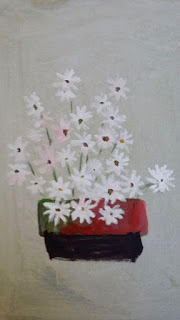 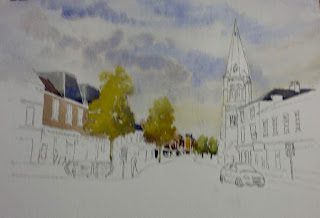 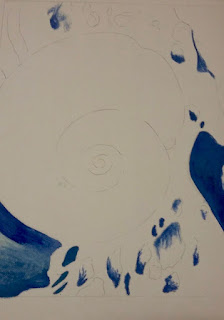 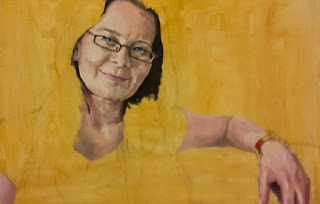 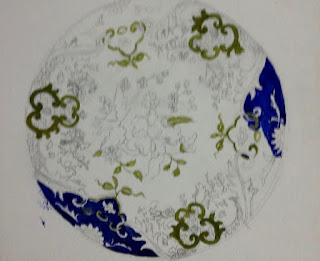 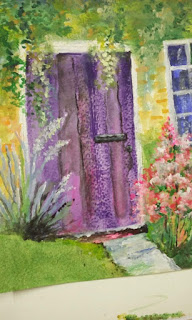 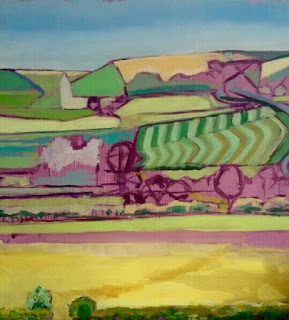 
Members were in for a treat as well as something completely different this Friday evening, with a demonstration by local artist Bob Morley. His talk entitled “Working with Emulsion Gouache – a different medium” started with a little artistic history about himself and his transition from watercolour to a gouache/watercolour technique. Bob showed numerous works based on this process ranging from early to current paintings.

For those of us who had previously seen and admired his unusual style, this was a real eye-opener to how Bob goes about this type of painting. His works are based on ordinary (Homebase – jokingly) white emulsion, to which he adds watercolour in varying strengths.
Starting with a pre-prepared sketch with a little watercolour added, along with a flat plate which had a huge spoonful of thick emulsion in the centre with small amounts of watercolour dabbed from 5ml tubes in a circle around it, Bob showed us first how to mix the two mediums together. It was possible to get quite a large array of tones for each colour using this mixing technique, which could then be applied to the 140lb paper either mixing with wet watercolour on the paper, or going over dry watercolour. This emulsion could be applied in its neat form over a wrong or unwanted existing colour, and then repainted almost straight away!

For creating beautiful looking trees, Bob first painted the trunk, branches and twigs, followed by paint with a sponge and watercolour, then neat with emulsion – again using the sponge, then again using different shades of colour. He then repainted some of the branches using a rigger. We were then amazed when he applied neat emulsion with a chisel ended brush between the branches in a negative painting way, to leave white or to re-apply the background colour. Bob demonstrated that any mistakes or unwanted parts could be completely blocked out in this fashion, by emulsioning over part of a hedge to add a gate. The build-up of gouache in this way added a textured look to the finished work.


Using gouache and a strong mix of watercolour like this, Bob said that it was possible to get really dark coloured areas in his work, breaking with convention often by using black. Another way that he would break with convention was to use a rigger with a dark tone in a linear fashion to add lines in various places, especially in horizontal strokes, which he explained added a peaceful feel to the work.

The evening concluded with us all “having a go” to get first-hand experience with this wonderful technique. Finally, we all got to go home with a handy pamphlet compiled by Bob explaining the technique – no expense spared!
Posted by _Frankb10 at 20:00 2 comments:

The thing is, with this painting lark, there are a multitude of avenues to pursue. For many years I painted purely in watercolour. It was lovely to push this translucent paint around the paper and watch the colours granulate, drop in other colour while still wet, see happy accidents appear when the paint decided to do it's own thing, etc.

Then I moved to acrylics with its garish colours and quick drying time, and bliss of bliss, opaque paint that you can paint light over dark .

I've made other excursions into soft pastels, oil pastels, charcoal, gouache and even lino cuts. Each has it's own merits, drawbacks and excitements.

Recently though, I've ventured into oils, a medium that I've steered clear of in the past because having dabbled in it many years ago, it always seemed a messy, smelly medium to use. The main joy with oils however, is the ability to blend colours and also the colour you put down when wet remains the same when dry, unlike watercolour that drys lighter and acrylics that dry darker or even gouache where light colours dry darker and dark colours dry lighter! With oils, the colour remains the same wet or dry. The only drawback (for me) is the long drying time. This is where alkyd oils come to the rescue though. I use mostly alkyd oils because on a warm day, they can be touch dry in a few hours and just about completely dry overnight.

Having started with canvas paper, then moving on to small stretched canvases, inevitably I moved on to larger canvases, doing larger that life portraits and pets. This has gone on for a while, but now something different is happening. I have changed to doing a series of miniature works on six inch square MDF board. Where canvases seem to mop up the brushstrokes, I've noticed that the smoothness of MDF shows up brushstrokes beautifully and can be used to great effect adding texture and form to the work. 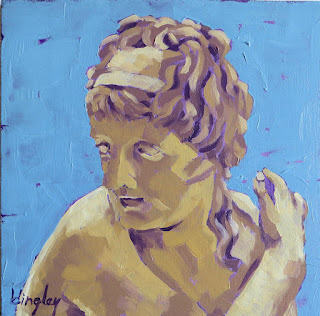 I don't know how long these miniatures will go on for - not much longer I should imagine, as my stocks are almost depleted and when I get some more, it most likely will be larger sizes for more experiments!

Right: Venus (Aphrodite). This was painted from a sculpture in the British Museum in London. I've used a split complimentary here with just three colours plus white.
Posted by _Frankb10 at 21:05 1 comment:


Generous with their knowledge, inspiration, advice, and stories MHAC members made appraisal night very enjoyable. Just a few topics included: Ken's painting experience with Terry Harris, David's mark making abstracts which have been accepted into the Alfred East Gallery, Cornelia's watercolour of the Naseby monument with history and painting strategy, Alan's awesome New Zealand water colour, Lynda's extended pictures into the frames, Francis limited colour acrylic painting, and Frank's 'impact portraits'. Everyone was amazed and marvelled at the quantity and quality of his portraits. He recommended that we all take a look at Julia Kay's portrait party on Flickr. 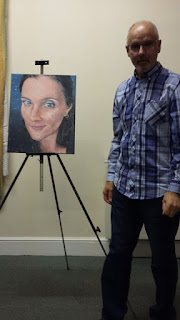 The star of the evening and the 'one to watch,' is our latest and youngest member Eden Coe. At sixteen her work has featured in the Leicester Open 27 exhibition. She shared her thoughts and creative process with the group. The 'pears/pairs' work intrigued us all. 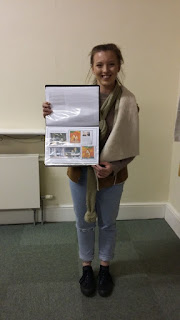 Thank you to all participating members and guests for making it such an informative and enjoyable evening. No more dreary paintings for me; ideas, response and translate!
Posted by Mintasius paints at 17:40 2 comments: