This month we had a workshop led by Ken Lilley. His aim was to get us all painting figures in a simple constructive way so that we would feel competent to add figures to our landscapes or city cityscapes. He said”, Very little is needed to persuade the viewer that the figure is a credible person, but the proportions must be right. To help this to be effected, he suggested that the head would go into the length of the body 7 times. Michael, standing with his hands in his jean pockets, was used as an example for this rule.

We were not going to try to draw a figures in detail but rather give an impression. The first exercise that was demonstrated was the use of a carrot shape and then the MW concept. Further illustrations were put onto a board and onto a computer screen.

The first task in a sequence of suggested quick paintings was a line of people from the imagination with  their backs towards the painter. Next, movement with ink or pencil added to a quick painted figure to give a feel of movement. Lastly, a rainy day with long vertical shadows (from Ken’s sketch book).

This exercise gave us all more confidence in describing the human figure in a simple and economical way when using watercolour paint.

Below are works from (decending) David, Michael and Frank. 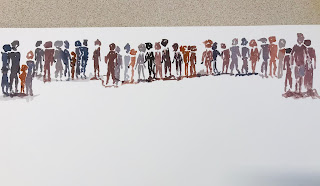 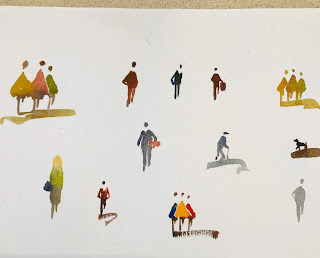 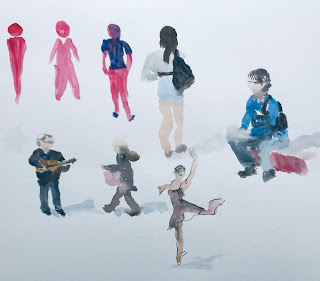