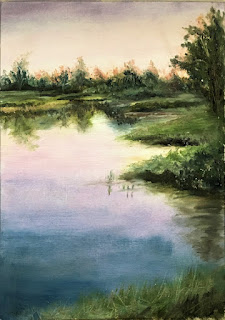 Our art club met for the last time in 2018 with an informal painting session. We were spurred on by a quiet, relaxed atmosphere and an unhealthy supply of the most sumptuous mince pies, provided by Ken in celebration of Christmas! 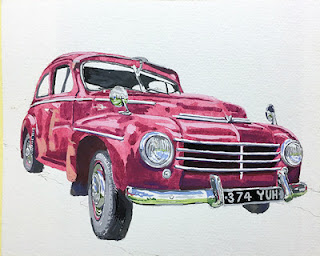 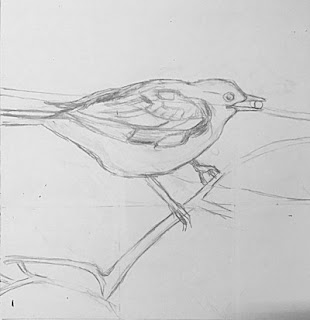 Archie produced this fabulous landscape in next to no time, while Frank got lost in the detail of this classic car. Jane was very much taken by a blackbird she'd spied eating the berries on a pyracantha on the hedge next door and proceeded to sketch it. 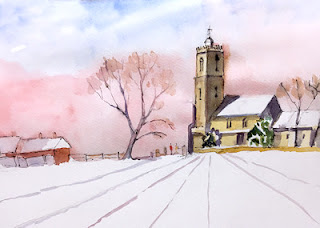 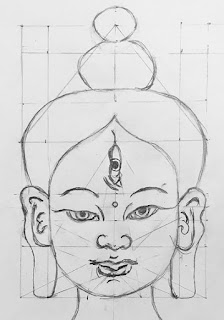 Ken was very much in seasonal mode with his painting of a church in the snow and Leslie went into illustration mode sketching a buddha's head ready for a painting. 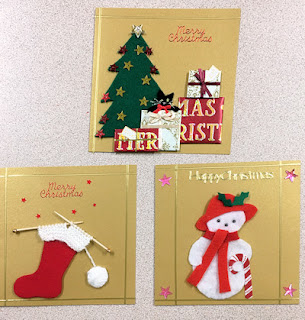 Lynda surprised us all when she got out her knitting needles and started to Knit, then amazed us by producing these three bespoke Christmas cards!

On the whole, the evening showed what true diversity our members have when it comes to art. 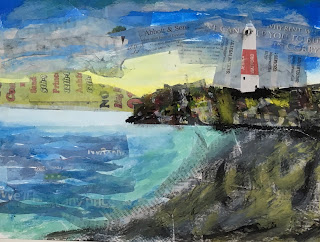 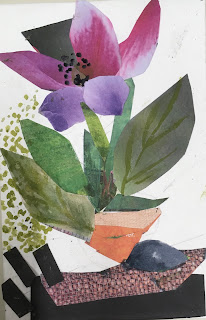 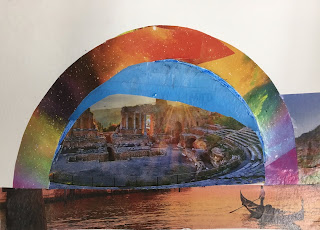 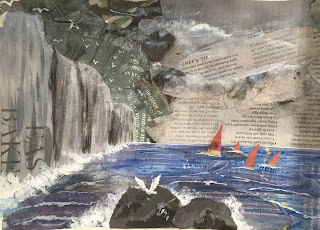 Helen’s Norfolk up bringing influenced her love of the natural world. She trained in art and design at Bournemouth art school, and started out in graphic design. Sitting at a computer all day did not appeal, so she used her watercolour painting skills and her love of wildlife to develop her career in art. Now she gains commissions linked to her passion for wild life and conservation. In addition to this she teaches adults water colour painting.

Helen’s taster and tips demonstration was seasonal being based on ‘autumn’.


·      Know your paints, each manufactures colours work differently.
·      Plan ahead.
·      Note the direction of light and paint accordingly.
·      Avoid going in with heavy with paint.
·      Start soft and misty.
·      Apply clean water with an ample brush, creating a damp surface and not a puddle.
·      Start with very dilute paint and allow the highlights to show through.
·      Remove drips with a clean brush by lifting off the blob of paint.
·      Allow the paint to dry before applying more layers; a hairdryer can be used to speed up the process.
·      Dampening the paint surface with clean water, before adding a second layer of paint in this way tones can be built up.
·      Paint leaves before twigs, Helen favours sap green, which can be glazed over with yellow to create light effects, and the dark areas can be glazed over with blue.
·      Twigs use a rigger to apply clean water to where you want the twigs to be; once the paint hits the water you create a snail like effect.
·      Trees look at the colour, pattern and texture and use that knowledge to paint a tree, do not paint individual leaves.
·      White flowers are not pure white, look for the colour in them
·      With flowers start drawing in the middle and work outwards.
·      Negatively paint and hint at the masses through light and shade
·      Sharp edges are done on dry paper.
·      Backgrounds give context so negatively paint around the flower.
·      Neutral Tint is used to darken paint without changing the colour.

A big thanks you to Helen for a very informative evening. 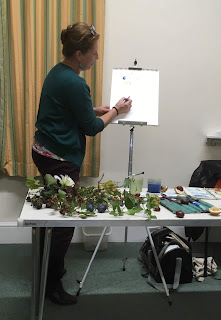 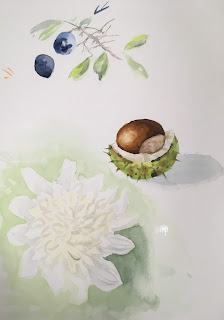 Local dance teacher and artist demonstrated his oil painting technique. Follow the link to his website to view more of his work

Inspired by Renaissance painters and Goga. He clearly understands form and painting as he checked the ball of the foot was in line with the cheek. Glenn was very generous with his knowledge as he talked us through his technique. A useful tip is to use a couple of drops of Blackfriars liquid driers in a little linseed oil and turpentine. Apply to the painting in a well-ventilated space. The oil paint will be dry in two to three days. 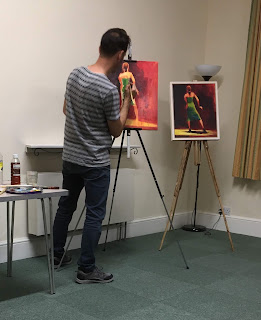 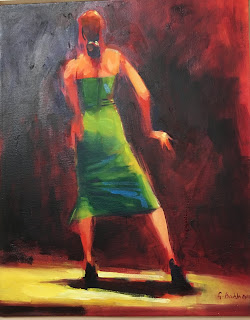 Posted by Mintasius paints at 12:19 No comments:

Here at Market Harborough Art Club, we are pretty much 'hands on' at our monthly meetings. Our June meeting was very much in that vein, with David Coleman leading our group to paint a Seaside Scene using A5 size paper or card. Most of us managed to end up with a somewhat finished piece, though some took theirs to finish at home.


The idea of the topic is that David will take the finished works and mount them in a display to show at our forthcoming exhibition in October, after the success of our composite image displayed last year attracted quite a bit of interest from visitors to the exhibition.


If you are wondering what we will be getting up to at our next meeting, do have a look at the programme page on our website.

If you ever get chance to be tutored by Scott Bridgwood, take the opportunity. This guy really knows his stuff and is very generous with his knowledge.

This year I have been disappointed with the artwork I have produced. Some people would say I have had ‘artist block,’ but I am not short of ideas, it is the development of them.  During the appraisal evening Scott helped me clarify my thinking so I can now progress and move my work up to the next level. 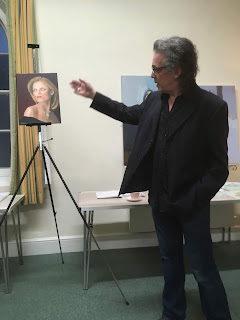 Posted by Mintasius paints at 16:03 No comments:

Rip Up Your Artwork!

Three members of our club (including myself) attended a workshop at Wistow Gallery recently, under the tuition of Danielle Vaughn of Sky Portrait Artist of the Year fame. Our medium was to be old magazines ripped to shreds and our brief was to compose a large 45x45cm painting on corrugated cardboard using the paper shreds. The idea intrigued me and I wasn't quite sure how we were going to go about this, especially as Danielle stated that we wouldn't be doing any drawing first.

After choosing our subject matter, we were instructed to cover the board with a suitable background first. Mine was to be a common gull, which in the photo, had nothing but sea behind it - no sky. I chose to add a sky, with a bay and land in the mid ground.

It soon became apparent that there is a knack to tearing the paper. When tearing magazines across the page, it was impossible to ear in a straight line, let alone a thin strip. However, tearing a piece down the length of the page gave a reasonably straight line every time. Tearing thin strips got harder though as the hands started to get a bit slippy from the PVA glue we were using to stick them on with. I also realised that one side of the tear left a thin, white jagged edge, which worked perfectly as froth on the waves.

Eventually, my board was completely covered with a background and looked splendid! Looking around at other's work at this stage was fascinating to see their ideas and methods of approach.

Adding the gull was going to be the part that needed a bit more artistic flair. As we weren't to draw, placing a few pieces of paper at strategic places helped with getting the scale correct. It got really exciting to see the gull slowly appear and how different shapes, colours, text and patterns could be used in composing the work.

Overall, I was surprised at how easy and quick creating artworks like this is, as well as being absolutely fascinating! Most of the works turned out to be really colourful too, and although there wasn't the problem of mixing paint, searching through the magazines for just the right colour did get a bit time consuming.

Jane didn't quite get her artwork finished, but is shown here as an unfinished work and gives some insight to how the subject matter is built up. No doubt it won't be long before she gets the urge to finish the work done so far.

Ken's Robin shows how colourful some of our artworks turned out to be. He has retained some of the text from the magazines for additional interest.

For anyone looking for something that little bit different to do, I can highly recommend booking a place at one of Danielle's workshops, which are held periodically at Wistow Gallery's Art Shed.