Rip Up Your Artwork!

Three members of our club (including myself) attended a workshop at Wistow Gallery recently, under the tuition of Danielle Vaughn of Sky Portrait Artist of the Year fame. Our medium was to be old magazines ripped to shreds and our brief was to compose a large 45x45cm painting on corrugated cardboard using the paper shreds. The idea intrigued me and I wasn't quite sure how we were going to go about this, especially as Danielle stated that we wouldn't be doing any drawing first.

After choosing our subject matter, we were instructed to cover the board with a suitable background first. Mine was to be a common gull, which in the photo, had nothing but sea behind it - no sky. I chose to add a sky, with a bay and land in the mid ground.

It soon became apparent that there is a knack to tearing the paper. When tearing magazines across the page, it was impossible to ear in a straight line, let alone a thin strip. However, tearing a piece down the length of the page gave a reasonably straight line every time. Tearing thin strips got harder though as the hands started to get a bit slippy from the PVA glue we were using to stick them on with. I also realised that one side of the tear left a thin, white jagged edge, which worked perfectly as froth on the waves.

Eventually, my board was completely covered with a background and looked splendid! Looking around at other's work at this stage was fascinating to see their ideas and methods of approach.

Adding the gull was going to be the part that needed a bit more artistic flair. As we weren't to draw, placing a few pieces of paper at strategic places helped with getting the scale correct. It got really exciting to see the gull slowly appear and how different shapes, colours, text and patterns could be used in composing the work.

Overall, I was surprised at how easy and quick creating artworks like this is, as well as being absolutely fascinating! Most of the works turned out to be really colourful too, and although there wasn't the problem of mixing paint, searching through the magazines for just the right colour did get a bit time consuming.

Jane didn't quite get her artwork finished, but is shown here as an unfinished work and gives some insight to how the subject matter is built up. No doubt it won't be long before she gets the urge to finish the work done so far.

Ken's Robin shows how colourful some of our artworks turned out to be. He has retained some of the text from the magazines for additional interest.

For anyone looking for something that little bit different to do, I can highly recommend booking a place at one of Danielle's workshops, which are held periodically at Wistow Gallery's Art Shed.

After our AGM a mini competition was held. The subject was Architecture. Sally Struszkowski and Lynda Talbot both had the same number of votes and shared first place. Sally's is top centre and Lynda's is bottom centre. 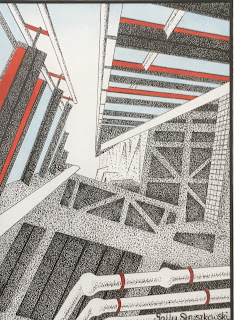 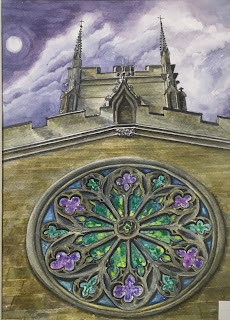